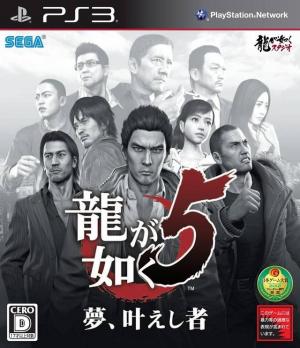 JapanYakuza 5 (Japanese: 龍が如く5 夢、叶えし者, Hepburn: Ryū ga Gotoku 5: Yume, Kanaeshi Mono, "Like a Dragon 5: Fulfiller of Dreams") is an action-adventure video game developed and published by Sega for the PlayStation 3. The game is the fifth main entry in the Yakuza series. The game was released in December 2012 in Japan, and localized for North America, Europe and Australia as a PlayStation Network download in December 2015. A remaster with improved resolution and frame rate was released for the PlayStation 4 on June 20, 2019 in Japan, and worldwide on February 11, 2020 as part of The Yakuza Remastered Collection.[1] Versions for Microsoft Windows and Xbox One were released in January 2021.[2][3] The game features a new graphics engine, unlike previous games in the series that have been re-utilizing the same engine since Ryū ga Gotoku Kenzan!. For the first time in the series, it features five settings across Japan along with five playable main characters.[4][5] Yakuza 5 was followed up by the spinoff Yakuza Ishin and the prequel installment Yakuza 0 in 2014 and 2015 respectively.