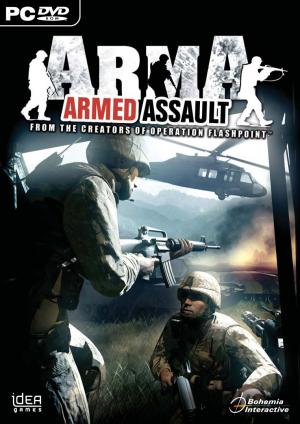 ArmA is a first person tactical military shooter with large elements of realism and simulation. This game features a blend of large-scale military conflict spread over large areas alongside the more closed quarters battle. The player will find himself thrust in the midst of an engaging and expanding storyline, fighting against smart, aggressive enemies who will continually provide a challenge over a massive landscape. Story driven singleplayer campaign: by choosing the right mission order when playing the 20+ mission campaign you write your own history. Play it differently next time and find new ways to victory! Large scale multiplayer: battles where tanks supported by infantry and helicopters take control of an enemy city can be played with 100+ living opponents in a role of both friendly and enemy forces. More than 30 weapons: a new and improved recoil system gives unique firing characteristics to every weapon. Vast environment to explore: an area over 400 square kilometers in size, full of flora and fauna is ready to be explored at your command. More than 30 modern vehicles: all vehicles in the game can be controlled - tanks, armoured vehicles, helicopters, airplanes, civilian cars or even boats. Multiple gunners: utilize the multiple gunner positions on tanks and helicopters to rain death on your enemies both in multiplayer missions and singleplayer campaign. HDR Lighting effects: ambushing an enemy with the sun in your eyes leaves you at the disadvantage. Think smart, fight better! Real constellations and tides: ArmA's great depth even includes such features as fully simulated star maps, lunar cycles and tides. Watch where you park your vehicle, soldier! Built-in mission editor: create you own scenarios using the easy-to-use mission wizard, advanced built-in mission editor, scripting language or BI tools available online and share your creation with the game community.