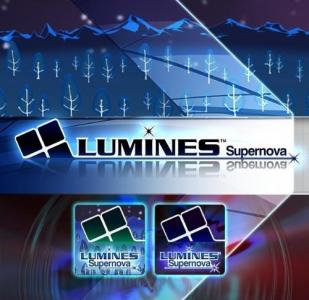 Lumines (ルミネス Ruminesu?) is a puzzle video game based on sound and light patterns. Created by game designer Tetsuya Mizuguchi and his company, Q Entertainment, it was first released as a launch title for the PlayStation Portable in Japan on December 12, 2004 and released in North America on March 23, 2005 and released in Europe on September 1, 2005. As of October 11, 2005, Lumines has sold over half a million units since its original release in Japan. Europe has sold 180,000 units since its release in September 2005, and North America has sold around 300,000 since March while selling 70,000 units In Japan.[1] In September 2005, mobile gamemaker Gameloft announced that they would be bringing both Meteos and Lumines to cell phones. Lumines Mobile was released on March 1, 2006. A port for the PlayStation 2 was released on February 18, 2007 in Europe and February 27, 2007 in North America as Lumines Plus.[2] It was also released for PC on the WildGames platform in December 2007 and later on Steam in 2008. In 2009, Lumines Touch was released on the iTunes App Store for iOS devices. The game was followed up by four sequels: Lumines Live! and Lumines II were released in 2006, Lumines Supernova in 2009,[3] and Lumines Electronic Symphony in 2012.