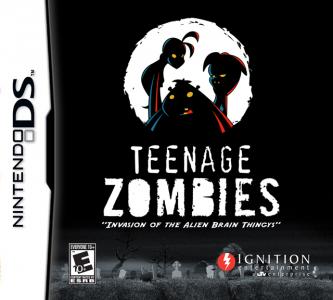 The Earth is under attack by a horde of Alien Brain ... uh ... Thingys! Humans, succumbing to ray-guns, mind-control, and shiny flying saucers, have failed to defend their planet and let it fall easily into the clutches of the Big Brain and his army of Brain Thingys. The only hope left for mankind is three Teenage Zombies that have arisen from a graveyard disturbed in the invasion. The undead trio ignores their normal human victims in favor of the pulsing pink brains they see EVERYWHERE - all the while being lured to the ultimate lunch: THE BIG BRAIN! The Big Brain soon refocuses his efforts and resources to battle the Earth's greatest champions: The Teenage Zombies! Teenage Zombies uses a whimsical style that focuses on, and parodies the Zombie genre, as well as 1950s style Science Fiction. This is presented in a comic book look featuring comic book panels, dialogue boxes and story telling. Gameplay involves side-scrolling adventures opening up to stylus mini-games, double-screen boss battles, and brain busting puzzle challenges.