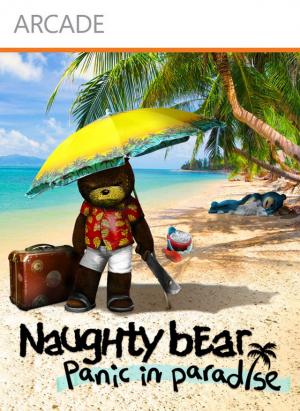 Naughty Bear is a third-person shooter action video game released in June 2010 for the PlayStation 3 and Xbox 360 consoles. Players control the eponymous bear as they use various things to earn "nasty Points", with extra points being given for random missions.[1] The game is set on a paradisal island where teddy bears live in harmony. The main character, Naughty Bear, is a shabby teddy bear who has a tendency to be mischievous, which earns him the dislike of the other bears. Like the other teddy bears, he does not speak but instead conveys his emotions through a variety of sounds and facial expressions. His actions are influenced by an unseen narrator with a demeanor reminiscent of that of a young children's television show host.[2][3]