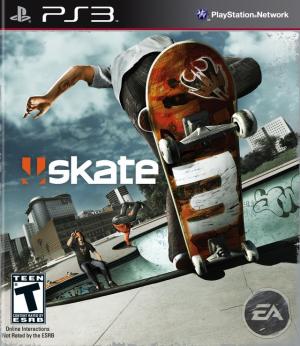 Skate 3 is the third installment in the Skate series of video games, developed by EA Black Box, and published by Electronic Arts. Released on May 11, 2010, It is the sequel to the 2009 game Skate 2.[1] The game takes place in the fictional city of Port Carverton, which embraces skateboarding, unlike the "skateboarding is a crime" mentality portrayed in the second game. Although the location is a more colorful and friendlier place than Skate 2‍ '​s desaturated, and grainy streets, the gameplay provides a similar feel to the first and second games.[3] Port Carverton is made up of three districts, Downtown, the University, and Industrial. Although the overall look of the city is very clean (except industrial) each district has its own unique designs and monuments. Downtown is full of slick rigid ledges and rails, while the University is full of banks and open areas. Industrial is the most unique; it is home to a huge quarry that has bricks of stone.[4] Several notable skateboarding professionals appear throughout the game, such as Darren Navarette, Terry Kennedy, Eric Koston, Chris Cole, Pat Duffy and Jason Lee. In contrast with the original Skate, two new difficulty levels have been added: "Easy" and "Hardcore" modes. "Easy Mode" allows the player to perform tricks easier and provides greater control of the character. "Hardcore Mode" attempts a closer simulation of skateboarding and the player must perform tricks precisely. The game also features an introductory "Skate School", where Coach Frank (Jason Lee) teaches players the basics of skateboarding, such as grinding and performing ollies. This feature is optional and the area can also be visited for unrestricted skateboarding. Similar to the Tony Hawk games, Skate features a "Skate Park" that allows players to build custom skate parks. EA introduced three new online game modes: "1-Up", "Domination", and "Own The Lot". In "1-Up", players compete in turns to beat the other team's last score in a given time period. In "Domination", teams compete to gain the most points on set spots in an area within a time limit. In "Own The Lot", the teams compete to be the first to complete a number of specified tricks in a certain area.