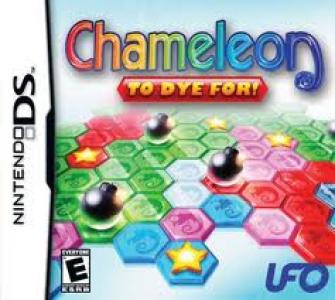 Chameleon: To Dye For!

Chameleon offers players simple controls that are easy to get into along with competitive play as you attempt to match colors on your playfield. The game features several playable characters along with a bonus character. Wireless play and a variety of rule sets bring great replay-ability to this addictive game. Chameleon: Multiple Characters – Select from 4 characters each with their unique abilities. Master the game to unlock the Ultimate Secret Character. Modes – Various modes for puzzle game fanatics. Be the first to reach the flag in Goal Mode. Battle for supremacy and control the board with your colors. Overtake your opponent and command the game in King Mode. Multiplayer – Two players can battle and test each other’s ability to think and react fast. The optional settings offer various modes that change the battle experience giving players a numerous amount of multiplayer functions. Random Generator – With puzzles always being randomly generated, no two games are alike.