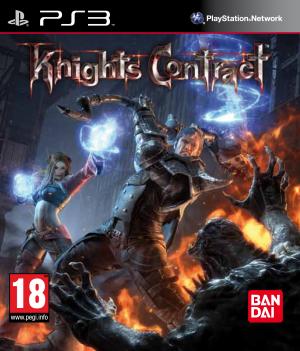 The setting of Knights Contract is in a fictional Europe during the Middle Ages, with dark fantasy characteristics, involving witchcraft, sorcery, and otherworldly monsters. A superstitious hatred for witches is the norm for society. As a result, people employ witch-hunters and witch-executioners. The game follows Heinrich Hofmann, an experienced witch-executioner plagued by a curse, and a young woman named Gretchen, who is the reincarnation of a witch Heinrich executed under the orders of Dr. Faust. In what initially seems an act of revenge for her execution, Gretchen curses Heinrich with immortality. At the same time, Dr. Faust, the game's main antagonist, creates hordes of monsters that terrorize the world. The mad scientist is responsible for the deaths of Gretchen and her fellow witches. Gretchen, intending to protect humanity, decides to confront the menace directly, by joining forces with the cursed executioner, Heinrich. The now-immortal Heinrich is forced to protect the mortal Gretchen from danger, in hopes of undoing the curse and defeating Dr. Faust.