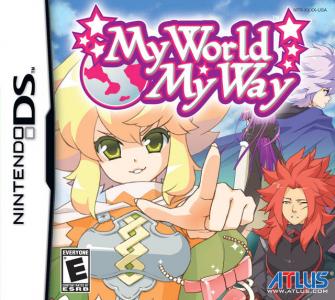 My World, My Way

The World Revolves around you in the fun DS RPG! Elise is a beautiful princess who has been given everything she’s ever wanted... Except a handsome boyfriend. Only one young man catches Elise’s eye, and, as it turns out, he is no prince, but an adventurer. She confesses her desire to share in his exciting life... Only to be flat out rejected. He tells her, "Cast aside that frilly dress, and don a suit of armor. Gain some experience in battle, and when you have matured, we shall meet again. Until then, I bid you farewell." Elise, the clueless princess, sets out on her adventure! It’s her world, her way, and as long as she can help the weak, slay the monsters, and win enough fame, she’ll get her happily ever after!