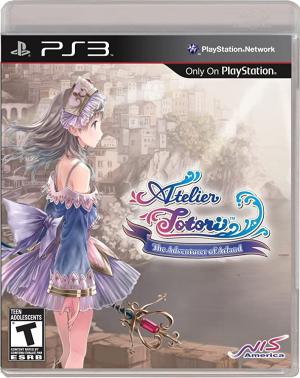 Atelier Totori: The Adventurer of Arland

Atelier Totori: The Adventurer of Arland (トトリのアトリエ ～アーランドの錬金術士 2～ Totori no Atorie: Ārando no Renkinjutsushi 2?) (known in Japan as Atelier Totori: The Alchemist of Arland 2) is a Japanese role-playing video game developed by Gust Co. Ltd.. It was first released for PlayStation 3 on June 24, 2010 in Japan. Atelier Totori is the twelfth installment in the Atelier series, and it continues the series' emphasis on item synthesis. The game is the second in the Arland series and a direct sequel to Atelier Rorona: The Alchemist of Arland, taking place five years after the end of Atelier Rorona. It is followed by Atelier Meruru: The Apprentice of Arland, which was released in June 2011. A version for the PlayStation Vita titled Atelier Totori Plus: The Adventurer of Arland was announced in the Dengeki PlayStation in August 2012, and released in Japan on 29 November 2012 An international release of the port by Tecmo Koei was hinted at by an R-18+ rating appearing on the Australian Classification Board's website.