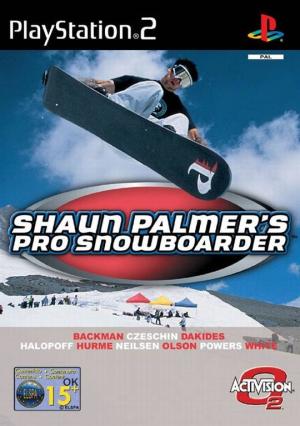 Shaun Palmer's Pro Snowboarder is a snowboarding game that resembles Tony Hawk in gameplay style where player's can pick from ten different professional snowboarders such as the game's namesake, Shaun Palmer, including Shaun White, Tara Dakides, Ross Powers, Tommy Czeschin, Leslee Olson, Jimmy Halopoff, Ingemar Backman, Drew Neilson and Markus Hurme and eight real-life locations such as Aspen or Mt. Hood. There is a Freeride mode and a Career mode where the player performs complex tricks to gather points, but also must perform certain tasks for each stage in order to advance to further levels such as performing certain tricks or jumping off certain ramps and picking up various items scattered throughout the stage. There are also multiplayer modes present that lets friends go head-to-head either by racing to the end of the stage first or out perform each other. It also features music from Papa Roach, Static-X and Alien Ant Farm.