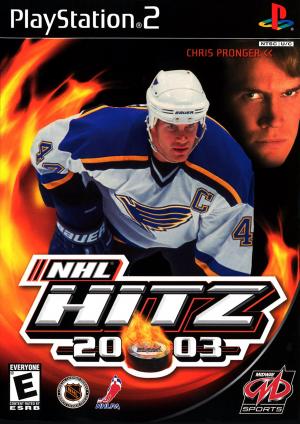 This game uses the same three-on-three style that debuted in Hitz 2002. The 2003 installment has larger rinks, bigger crowds, a referee, and animated coaches. All 30 NHL teams are represented with motion-capture animation, and you can build your own players with the Create-Player option. The game's Season mode now allows for trades, stat tracking, and player awards. Up to four players can play each other in exhibition mode. Season mode puts you into a standard NHL schedule, but you can change to a shorter season if you want. There is also a small numer of hockey-related minigames, such as keep-away. Franchise mode is where you pick and name your team, name your players, and play against other teams to earn experience points. Those points can be used to upgrade your players in categories such as toughness, speed, passing, and agility. After beating all the lesser teams in a tier, you can move on to battle a "boss team" for that region. Beating that team nets you some new equipment for your players, which also improves their stats.