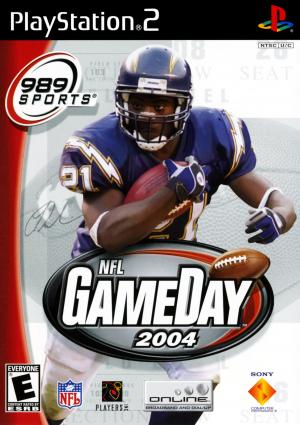 This year's edition has many new features that include tournaments, built-in message boards, virtual e-mail, and a voice recognition option. NFL GameDay 2004 also showcases the standards in mode selection. There are preseason, season, general manager, tournament, practice, and franchise management options. The general manager mode functions as the game's franchise mode in which you can take a team through numerous seasons in hopes of winning a Super Bowl, or, building a dynasty. The general manager mode lets you perform actions like trading players, signing free agents, drafting new players, managing playbooks, and viewing statistics to get a glimpse at the top players. Also featured is online play. There are message boards where you talk with other players and also e-mail other players by using your online nickname, and 989 Sports can even give you feedback on the game. The online mode also offers tournaments as well as stat tracking.