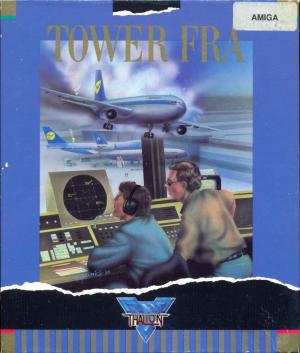 In Tower FRA, the player takes the role of an air traffic controller assigned to one of five German airports. As usual for this kind of game, the goal is to manage all incoming and departing air traffic without letting them crash into each other. The ten difficulty levels are gradually unlocked and influence both the amount of traffic and how long a round takes. So for example the first level involves five minutes of standard air traffic on a small airport while a higher one may offer 25 minutes, multiple runways and unexpected difficulties like emergencies or storms. The most important part of the playing screen is a radar which shows the air traffic. Here the player needs to observe and notice possible dangers. This screen is surrounded by a list which shows route information of each plane and a computer which holds (and puts out) information. When clicking on a plane on the radar screen, a separate window appears where the player can give detailed orders to the pilot regarding direction, height and velocity. [edit description]