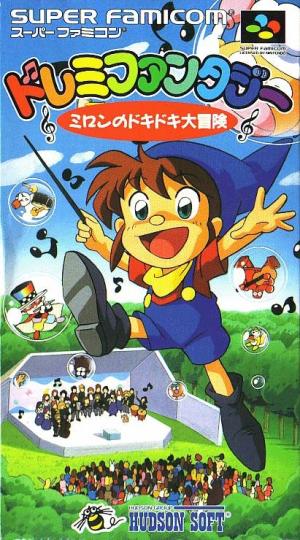 A young boy named Milon sets off to save Alis, his fairy friend, after she was captured by the evil sorcerer Amon. He later learns that the only way to defeat Amon is by collecting five legendary instruments which Amon has stolen. The sorcerer placed a curse on these instruments so that their true powers cannot be used and then left them in the hands of his minions. The only way to lift the curse is by collecting five stars. Armed with only his bubble shooter, Milon must retrieve the legendary instruments, lift their curses and use their powers to defeat Amon and rescue Alis. Traveling through many different worlds starting with the forest, Milon will be confronted by many enemies. Milon can either shoot bubbles to trap and send his enemies away, or he can jump and flatten his enemies temporarily turning them into a platform for him to walk across. Milon has three different "outfits": red, blue, and green. With the green outfit, Milon can withstand three hits. Each time he gets hit, he will be downgraded a color - green to blue, blue to red. If he gets hit with the red outfit, he will die and have to start the level over. By collecting 100 music notes, Milon will get an extra life. There are also other useful items to get like bubble gum that will save Milon once if he were to fall, a special bubble shooter that let's him shoot multiple bubbles at once and a star that makes Milon temporarily invincible so that he can defeat enemies simply by running at them.