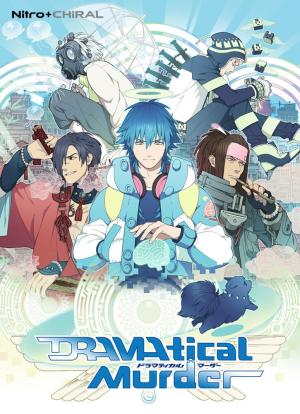 Dramatical Murder (ドラマティカル マーダー, Doramatikaru Mādā, stylized as DRAMAtical Murder) is a Japanese BL visual novel developed and published by Nitro+chiral. It was originally released on March 23, 2012 for Windows PCs as a first press edition, with a regular edition released on April 27, 2012. Dramatical Murder is a science fiction and romance visual novel in which players assume the role of Aoba Seragaki. Much of its gameplay is spent reading the story's narrative and dialogue. Dramatical Murder follows a branching storyline with multiple endings. Depending on the decisions the player makes during the game, the plot will progress in different directions. The game initially features four main plot lines, one for each of Aoba's potential suitors. Following the completion of all four, a fifth one is unlocked for Ren. Throughout gameplay, the player is given multiple options to choose from, and text progression pauses at these points until a choice is made. Each decision awards one point to Koujaku, Noiz, Clear or Mink respectively. The suitor who has amassed the largest number of points is the one whose plot line, "route", will be played. Once a specific route has been entered, four more options are presented to the player at specific points in the story; depending on which options are picked, the story will end with either a good or bad ending.