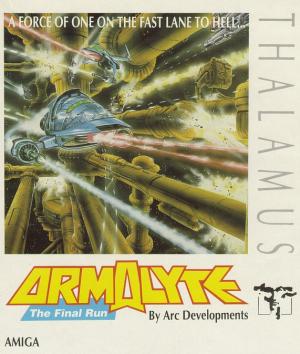 Armalyte: The Final Run, like its C64 namesake, is a traditional side-scrolling shoot'em up heavily inspired by R-Type, giving the player's spaceship the task of traversing five levels. The starting setup is a simple forward-facing shot as well as a power shot that must be charged by holding on to the fire button. Upgrades are a forward-facing three-way, a vertical two-way, or the addition of a single backwards shot (only one of the three at time). Also available are pods that attach to the ship and fire a forwards laser, and, only in the final level, self-homing missiles. The levels not only feature many enemy formations, but also environmental hazards, like drops of acid or falling stalactites. On one occasion, the scrolling speeds up, making the level a hazard course. Each stage ends with the customary end boss.