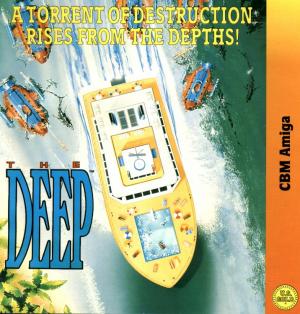 In The Deep the player takes the role of a ship which has to defend itself against a variety of underwater enemies, e.g. u-boats or jellyfish with weapons. All the enemies launch missiles or mines at the boat which can be dodged by moving left or right. Water bombs can be dropped to get rid of the enemies - but there are only eight available which slowly refill over time. Sometimes a helicopter drops crates which include useful extras like smart bombs, steering rockets or additional speed. The ship can also turn into a submarine to collect things under the water. Every screen has a different objective, e.g. collecting an orb, bombing an underwater station or destroying a powerful ship.