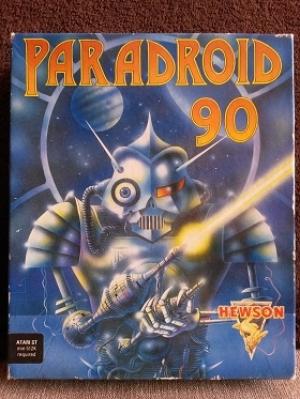 A fleet of space freighters carry a cargo of battle and security robots to help in the defence of Basmyth. Alien ships were bombarding the freighters with disorienting beams which drove the robots crazy. The human officers were eliminated, leaving the ships open for occupation by alien forces. At this point the players mission starts... You control a cybernetic influence device (ID) which has been teleported aboard the first freighter to eliminate all the droids and robots. Two ways are possible to clean the ship decks representing the action part and the more strategy part of the game: Shooting (action) to destroy the robots or connecting itself into an other robot's brain (strategy) and take temporarily control of it. It's possible to play the game as a simple shoot-em-up game, but the main part of Paradroid '90 is the transfer game to take control of other droids.