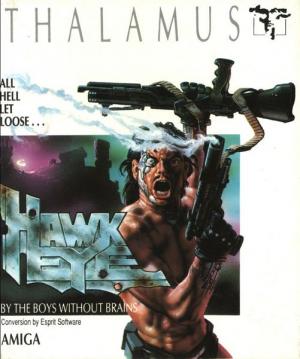 A bi-directional horizontally scrolling platform game, Hawkeye has the player in control of an SLF (Synthetic Life Form) controlled from an underground bunker by the Xamoxians. On each level, the eyes of the hawks in the status panel flash to indicate the direction to travel in to find a puzzle piece. Four pieces are needed to complete the level, but there were also other pickups such as ammo and energy. There were 12 levels to complete plus a hidden bonus level. The player has a choice of four different weapons. The basic pistol had unlimited ammo but did little damage. The machine gun had a faster rate of fire, the laser did more damage and most powerful of all was the rocket launcher - but all three soon ran out of ammo. The game features parallax scrolling backgrounds and large numbers of enemies (including large rhinos, triceratops and gorillas).