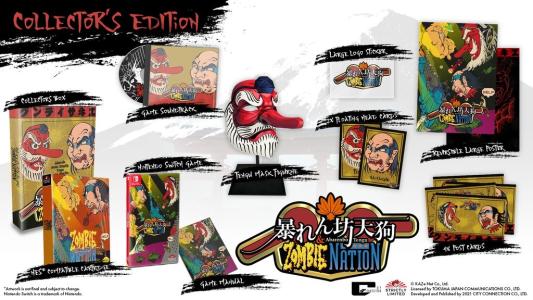 The NES cult classic is back! Save earth from an alien invasion as the ghost of a samurai! In 1991, a game was released for the NES that, while it was already clear would be something special, no one could have imagined would develop into such a cult classic in the years to come. Zombie Nation flew under many people’s radar at the time, but its crazy story and solid gameplay accumulated a dedicated fanbase over the years. As the disembodied samurai head Namakubi, or in the Japanese version a Tengu, you set out to rescue the world from the alien overlord Darc Seed, who transformed humanity into mindless zombies. On your way you will encounter a variety of bizarre stages and enemies, topped off by the game’s (in)famous boss battles. This new version for Nintendo Switch incorporates new additions, like quality-of -life features such as rewind and quicksave, rapid fire and new HUD elements, as is common with re-releases of classic games. You are also able to choose between the Western version, “Zombie Nation”, and the Japanese version, “Abarenbou Tengu” with two new modes per version. Additionally, there are new achievements and a gallery to unlock. All of this makes this the ultimate version of a beloved classic, now available on a modern console! Features The cult SHMUP released for the first time on a modern console! Play the western version you know, as well as for the first time the original Japanese version! East meets West! Battle through a war-torn country as samurai ghost, fight crazy bosses and save the world! Five diverse stages with a crazy cast of enemies! New modes and options, as well as quality-of-life changes! The Collector's Edition contains: Collectors Box Nintendo Switch Game NES Compatible Game (NTSC/North America) Tengu Mask Figurine 4x Post Cards OST Large Logo Sticker Floating Head Cards Reversible Large Poster Game Manual The NES cartridge bundle version is limited to 300 numbered NTSC copies and 200 numbered PAL copies.