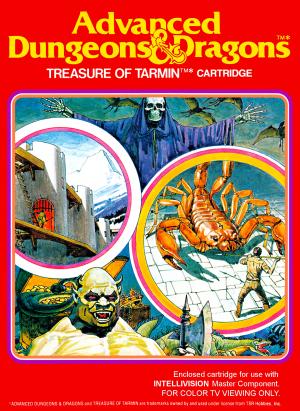 Advanced Dungeons & Dragons: Treasure of Tarmin Cartridge is a first-person dungeon crawler. It features gameplay elements such as hidden doors, magical weapons and a versatile inventory (which requires you to keep yourself fed and rested, otherwise you'll lose health). It also features up to 256 randomly-generated levels of the maze (depending on which of the 4 difficulty levels you choose) where you'll fight real-time battles against increasingly fierce creatures until you reach the Minotaur's lair, where he guards the Treasure of Tarmin.