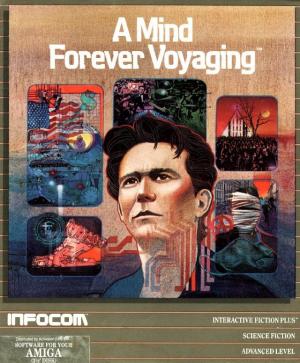 "If you can look into the seeds of time, and say which grain will grow and which will not..." --Shakespeare IT'S 2031. The world is on the brink of chaos. In the United States of North America, spiraling crime and unemployment rates, decayed school systems and massive government regulations have led to a lazy, contentious society. To reverse this critical situation, government and industry leaders have developed a Plan combining the economic freedom and strong moral values of the 1950's with the technological advancements of the 21st century. Will the Plan ensure peace and prosperity? Or will it set the earth on a suicide course to destruction? As the world's first conscious, intelligent computer, only you can visit places that have never been seen before. Only you can view the future. And only you know what must be done to save humanity. A major departure for Infocom, A Mind Forever Voyaging is reminiscent of such classic works of science fiction as Brave New World and 1984. You'll spend less time solving puzzles, as you explore realistic worlds of the future. [source: guetech.org] A Mind Forever Voyaging is a text-based interactive fiction game. The player reads descriptions which detail the surroundings and communicates with the game by typing in commands. Most of the time is spent in simulation mode where the player repeatedly visits the town of Rockvil and needs to record situations of everyday or special activities going on. If the player has recorded enough, the game progresses and the simulation ten years ahead can be visited. However, the recording device has no unlimited capacity - when full, the player needs to exit the simulation and let the recordings review by the project leader. Then the current simulation can be simply started again from the start to find new situations - the same applies when dying.