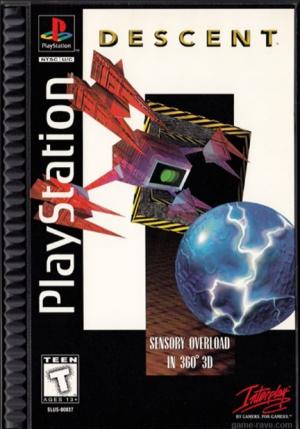 Descent is a first-person shooter (FPS) game developed by Parallax Software and released by Interplay Productions in 1995 for MS-DOS, and later for Macintosh, PlayStation, and RISC OS. It popularized a subgenre of FPS games employing six degrees of freedom and was the first FPS to feature entirely true-3D graphics. The player is cast as a mercenary hired to eliminate the threat of a mysterious extraterrestrial computer virus infecting off-world mining robots. In a series of mines throughout the Solar System, the protagonist pilots a spaceship and must locate and destroy the mine's power reactor and escape being caught in the mine's self-destruction, defeating opposing robots along the way. Players can play online and compete in either deathmatches or cooperate to take on the robots.