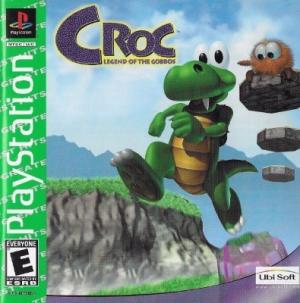 Croc: Legend of the Gobbos [a] is a platform game developed by Argonaut Games and published by Fox Interactive. The game was an early example of a 3D platform game, being released in North America in September 1997 for the Sony PlayStation, and later on that year for the Sega Saturn and Microsoft Windows. Taking place in the fictional setting of the Gobbo Valley, Croc: Legend of the Gobbos follows a young crocodile named Croc, who sets out to rescue a group of furry creatures known as Gobbos from the evil magician Baron Dante.