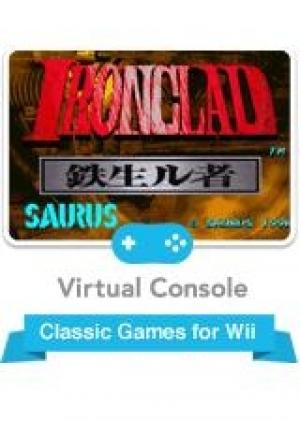 Ironclad is a side-scrolling shoot-'em-up originally developed by Saurus in 1996. You operate a warship and team with the mighty Iron Clad in order to fight the Iron Mask Republic and save the Kingdom of Chop. The biggest appeal of this game comes from discovering all the ways you can attack your enemies. Your weaponry includes three main blast weapons upgradable by collecting more items, a charged attack you can use when Iron Clad is attached to your ship, three types of melee weapons you can brandish to show off your strength in close-range combat, a bomber that clears all enemy bullets, and shooting patterns that change based on whether the Iron Clad is attached or disconnected from your ship. A vast array of weaponry lies waiting to become part of your arsenal. You can even select the stages you want to play, feeding your hunger for combat and allowing you to see different endings for each play-through.