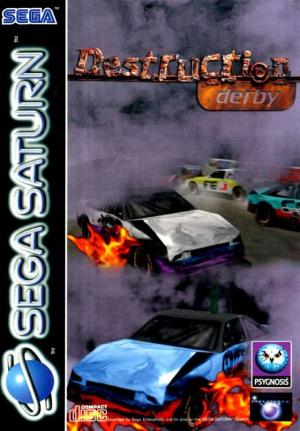 Destruction Derby is a vehicular combat racing video game developed by Reflections Interactive and published by Psygnosis. Based on the sport of demolition derby, the game tasks the player with racing and destroying cars to score points. The developers implemented simulated physics to make the results of collisions easier to predict, and they kept the game's tracks small to increase the number of wrecks. Versions of Destruction Derby were released for MS-DOS, PlayStation and Sega Saturn. A Nintendo 64 version, Destruction Derby 64, was released in 1999 by Looking Glass Studios and THQ. Critics found Destruction Derby enjoyable and they praised its graphics and car damage system, but the Nintendo 64 and Sega Saturn releases received mixed reviews. The game started the Destruction Derby franchise, beginning with its 1996 sequel, Destruction Derby 2. Destruction Derby is a vehicular combat racing video game based on the sport of demolition derby.[1][2] The game contains three vehicles.[3] Collisions in the game affect the controls of each car, limiting their steering and maximum speed.[4][5] Frontal collisions risk damage to the car's radiator, which causes the car to overheat and stop running.[4] Four game modes are available: Destruction Derby, Wreckin' Racing, Stock Car Racing and Time Trial. In Destruction Derby, the player earns points by destroying other cars in a large, trackless arena called The Bowl;[2][4] in Stock Car Racing, the player must finish in first place, and no points are awarded for destroying cars. Wreckin' Racing is a hybrid of the two, in which the player earns points both by winning the race and by destroying other cars. Time Trial is a solo time attack mode.[2] The PlayStation version features system link play for two players,[6] while the MS-DOS version has an online multiplayer mode.[4] Destruction Derby 64, the game's Nintendo 64 version, features updated graphics and an increased number of cars and tracks; and it adds new modes such as capture the flag.[7] The game contains twenty-four cars and more than twelve courses.[8] It also supports split-screen multiplayer for up to four players.[7]