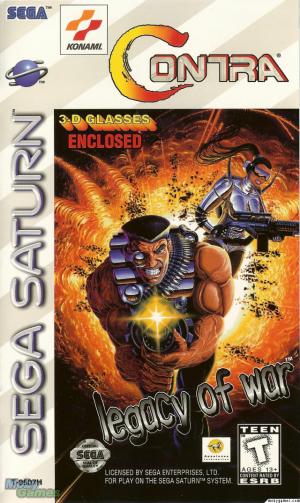 Contra: Legacy of War is a 3D action game produced by Konami and developed by Appaloosa Interactive that was originally released in 1996 for the PlayStation and Sega Saturn. It was the first of two Contra games that were externally developed by Appaloosa, followed by C: The Contra Adventure in 1998. The game marks the series' jump to three-dimensional graphics and controversial changes in gameplay. Legacy of War was released packaged with a pair of 3D anaglyph glasses, which the game supported. Legacy of War bears the distinction for being the first console game in the series to retain both the Contra title and human characters during its release in Europe and Australia (where the console series has been known as Probotector from the first NES game and up until Contra: Hard Corps). The game was scheduled to be released in Japan as well,[1] but was canceled.