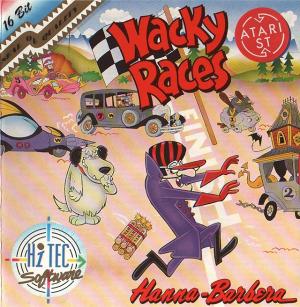 You take on the role of Dastardly and Mutley from the Hanna-Barbera cartoon series in this action title with superficial racing overtones. Your aim is to complete each course in a particular position, which is achieved either by waiting for them to suffer enough damage to drop out of the race, or by inflicting that damage yourself. Your car is armed with a forward-shooting arrow to impale the opposition cars, and deal with the many hazards the races throw at you, including boulders and rabbits, which can be taken out for points. The action is viewed from the side, scrolling horizontally as you progress, and vertically when you need to jump or duck over the bigger hazards, which must be avoided Moon Patrol style, meaning that you must often time one jump properly so as to be able to make the next one successfully. In some sections of the road you can duck down onto another set of roads, which may or may not be less hazardous. Falling into thin air costs you a life, while heavy impacts deduct some of your energy points. When the view doesn’t show the next section, and the correct course is not clear, an arrow appears to direct you.