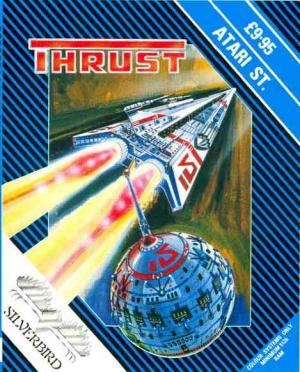 Thrust brings realistic physics and inertia-based movement into arcade games, directly influencing titles like Oids, as well as Exile from Audiogenic by the same author. The action is viewed from the side, with the graphics drawn in vectors, in keeping with the mathematical nature of everything that unfolds. As a Resistance fighter, the player must fly into enemy lines in order to steal Klystron Pods to power more advanced starships, using your tractor beam to take them. A network of mounted guns are aiming to shoot the player down – these can be disabled by shooting their power source, but eventually this will explode, forcing the player to flee. Some of the later levels feature reverse gravity, which increases the difficulty of the gameplay.