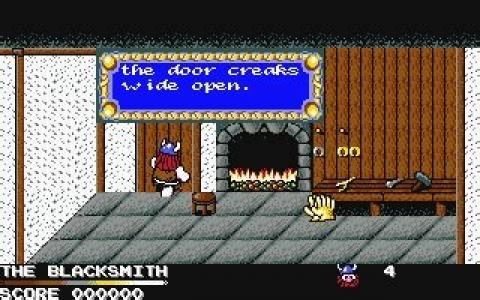 After a rough crossing of the North Sea, Spike the Viking is washed ashore. He ends up in Transilvania, which seems to be just an ordinary village. However, he finds out that his shipmates have been captured, and are being imprisoned in the dungeons of the local castle. Spike must rescue his friends from the mysterious castle, but first he has to escape from the (apparently friendly) villager's house where he finds himself, as the door won't open. The game is a mix of puzzles and action. The action involves you dodging various enemies, such as dogs, ghosts, bats, etc, and avoiding the many traps in the dungeons of the castle. You only have a limited amount of energy, and if you lose all of it by touching enemies or traps, you lose a life. If you lose all your lives you lose the game. The puzzles, which are mostly fairly simple, involve both the use of objects, such as money to bribe a guard, and switches that perform various functions, such as deactivating traps. Keys are very important, as they are needed to unlock your shipmates' cells. Some cells are protected by guards, who must be tempted away somehow to get to the cells they are guarding.