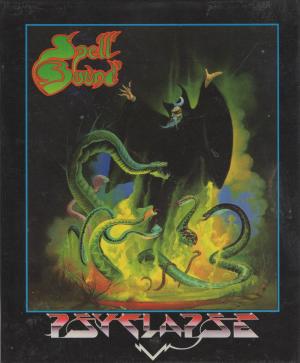 The apprentices Sortice and his twin Ceroapp are ready to become certified sorcerers - but just now some nasties had to kidnap their teacher! No teacher means no graduation, and therefore the two have to rescue him by solving eight side-scrolling levels with different themes, e.g. a swamp, a cave system or the Island of Lost Souls. The game is meant to be played cooperatively (including friendly fire), but when playing alone only Sortice is present in the game. Spell Bound is a platformer with the main goal being to reach the end of the level without being killed by the various enemies. Players have six spells at their disposal which basically boil down to different weapon systems as well as levitation. Each spell except the standard attack drains manna which, exactly like life energy, is refilled by collecting power ups; either lying on the ground or in locked chests which have to be unlocked by finding the correct key first. Other useful objects include crystals for disrupting energy fields, bombs to blow up stone pillars, or a jet pack. Each character can carry one object at a time and, when trying to cast a spell without having the needed manna, will experience negative effects like reversed controls.