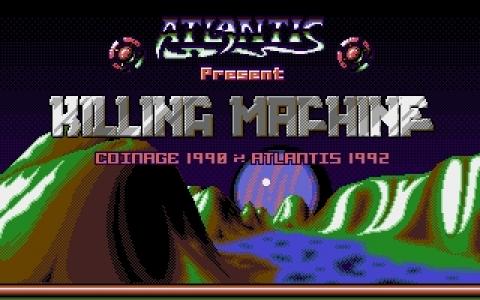 You have survived a battle in space but your craft is damaged beyond repair and needs evacuating, so in your emergency landing craft you head for the nearest planet. The planet you are heading for is uninhabitable after a giant brain that controlled all life became extinct, but as you approach the surface it becomes clear that this isn't true as you are attacked by various life-forms. Killing Machine is a top down vertically scrolling shooter where the screen scrolls upwards constantly as you attempt to shoot or avoid various aliens and vehicles over three levels. Getting touched or shot loses you one of three lives and sent to the start of the level you are playing. Certain objects when shot leave behind a power-up which gives you better weapons or a shield which is limited and if you lose a life then you lose your power-up. At the end of level one or two you face a huge Brain Guardian which needs destroying to move to the next level. At the end of the third level is the Giant Brain itself.