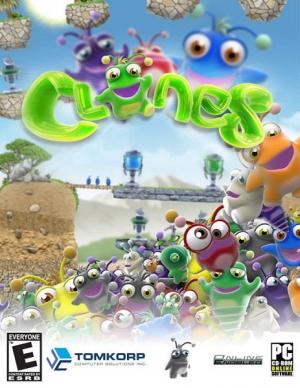 Imagine a planet with two main life forms. The first are the Clones who are made up of a flexible quantum goo which gives them amazing physical morphing abilities but also renders them simple-minded because there is no centralized brain. The second are the CloneMasters who physically inept but posses a great intellect. The Clones and the CloneMasters naturally team up to solve any problem and live in peace. Playing as a CloneMaster you will embark on a pilgrimage to study from the great CloneMasters scattered throughout the Clones planet. Defeating them in matches where you pit your clones against theirs will be the first step towards playing in the professional CloneMaster league against other humans from around the world! Clones is a puzzle/real-time strategy computer game that features alien creatures named clones to which the player can assign a variety of morph commands which cause the clones to deform their body in order to navigate the terrain. Multiple game types are supported as well as both singleplayer and multiplayer modes.