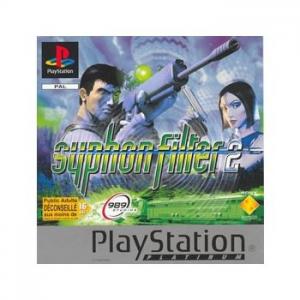 Syphon Filter 2 is a third-person shooter stealth video game developed by Eidetic and published by 989 Studios exclusively for PlayStation. Hours after the events of the first game, Gabriel Logan and Lian Xing are enemies of the state to the Agency after uncovering its connection to Syphon Filter, labeled as terrorists to the general public. Agency operative Dillon Morgan captures Lian at the PharCom warehouses, forcing Gabe and the CBDC soldiers to rendezvous with ex-Agency operative Teresa Lipan in Arizona. Simultaneously, the Agency scrambles a squadron of F-22 Raptors to intercept their transport over the Colorado Rockies, so Gabe and CBDC Lieutenant Jason Chance head down the mountain in search of their plane and a box of PharCom data disks. Agency operative Steven Archer attempts to stop them at all costs.