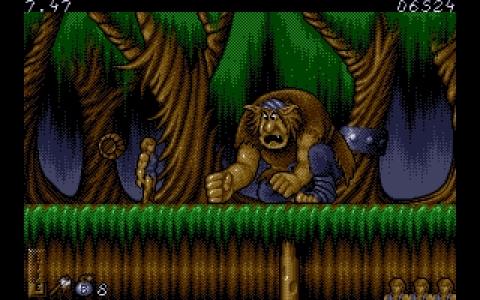 Ghost Battle is one of the earlier games by the German company Thalion Software. Spanning five short yet difficult worlds, the game borrows its visual style heavily from its better-known contemporaries like Shadow of the Beast and Ghosts 'n' Goblins. A simple arcade-style action game with some rudimentary adventuring and timing based puzzles thrown in, Ghost Battle casts you as a nameless hero on a quest to rescue his, yet again, nameless girlfriend from a nameless bad guy. Enemies have a horror look and feel to them - ghouls and disembodied heads for example. Initially our hero is armed with rocks, but extra weapons can be collected for specific tasks such as the bosses who end each level.