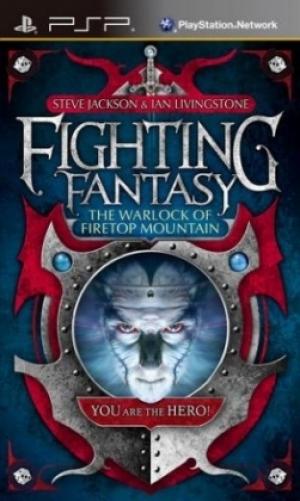 Once again, the pioneering 1982 Fighting Fantasy gamebook #1, The Warlock of Firetop Mountain, finds itself adapted for electronic play -- for the third time in three years, making for its fifth licensed adaptation! Gameplay is a very faithful adaptation of the gamebook's Choose-Your-Own-Adventure decision-making, souped up with some of Laughing Jackal's innovations (tarot-reading character generation, skill-testing minigames in place of randomized die-rolls) from their earlier adaptation of the gamebook Talisman of Death. Game text is presented as scrolling words on a page, complete with the book's original illustrations. The game's plot concerns itself with the player, an adventurer, putting to rest the concerns of a small medieval village about the nearby mountain fortress administered by the sinister magician Zagor. Through the player's canny decisions, successful stat-challenges (using the standard Fighting Fantasy metrics of SKILL, STAMINA, and LUCK) and some genuine blind luck, the player will navigate the catacombs, mazes and hallways of the mountaintop fort, and end up in a showdown with the titular warlock.