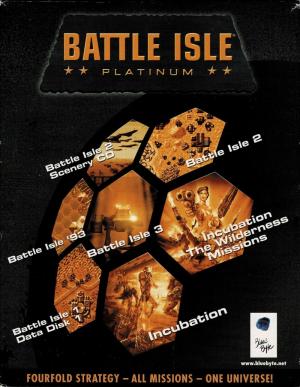 Battle Isle is pure strategy combined with innovative software technology and a compelling background story - and that since 1991! Battle Isle Platinum offers the opportunity to play and experience the entire Battle Isle history from the very beginning to the events on Scayra, the colonial planet of Chromos. Chromos - a planet so distant and yet so similar to the Earth! The history of the Kais and the Drulls is one comprised of only a few Chromian centuries, but centuries with one war following the other, with destruction and upheaval determining the development of Chromian society. Battle Isle Platinum contains the full versions of the following stratey games in one package: - Battle Isle 1 including Data Disk 1 and Battle Isle '93 - Battle Isle 2 including Scenery CD "Titan's Legacy" - Battle Isle 3 along with extensive video sequences - Incubation and The Wilderness Missions, complete in 3D