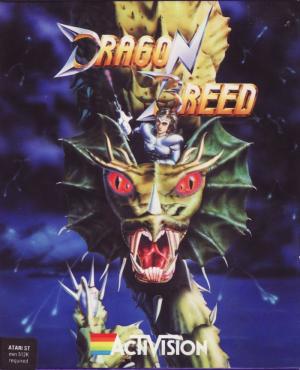 Zambaquous has done everything to make life hell for the people of Agamen, and as their King Kayus, the time has come to head out to destroy him. This leads to six levels of horizontally-scrolling shoot ‘em up action, although with some vertical movement as well. The thing which sets the game apart from every other horizontally-scrolling shoot ‘em up (except Saint Dragon) is that you are riding on the back of a dragon, called Bahamoot. Both you and the dragon have firepower, and holding down the fire button increases Bahamoot’s energy bolt’s ferocity. The dragon’s tail can be controlled indirectly, and because it is indestructible, it can be used either as a shield, or as a weapon in its own right. There are power-ups to collect by dismounting from the dragon and walking into them. These include fiery breath, bolts shot from Bahamoot’s tail, homing missiles of sorts, and lightning bolts, with only one ever active at a time. Each level has a time limit.