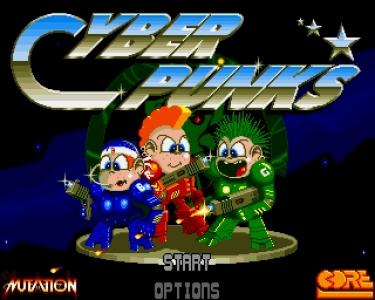 Take control of the 501st Cyber Assault Squad. Lead Raa, Gee, and Bee into battle against terrifying alien life forms, There are five missions, each has four decks. Use teleport pads to warp to another area of the deck. If you don't complete your mission under the given time limit, you fail. Raa, Gee, and Bee can carry up to six items in their inventory. The first two places are reserved for weapons. The four remaining places can be filled with ID cards, disks, smart bomb units, and shields. If one of the team members already have six items and they pick a seventh item up, then that item replaces the active inventory item (which is shown by a white border around it). During your mission, you can access terminals which require a red, green, blue, or yellow disk which can be found either lying about, or it is dropped by an alien. These terminals allow you to bypass door circuits, view deck blueprints, and scan restricted information. The blueprints are useful if you can't find your way around a deck. Also with these terminals, you can obtain several items like force field key circuits, party shield orbs, time distortion cubes, and much more. In between each mission, you are given a passkey, which you can enter at the title screen. This passkey lets you start a new mission later. If you haven't discovered the cheats earlier, they will be revealed when you complete the game.