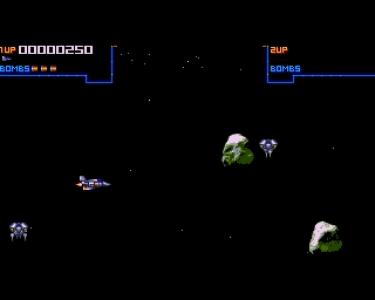 A shoot'em'up with decided Defender influences, Cybernetix has you strafing back and forth across a quickly scrolling screen which wraps at both ends. As in Defender, a radar at the top warns you of obstacles and enemies which you would otherwise crash into at high speed. The obstacles are made up of asteroids, which split up when shot. If you destroy the smaller fragments, they will release small crystals which grant you bonus points. But crystals also draw in greedy enemies. Similar to Defender and Dropzone, there is a large assortment of enemies with specific behaviours, weapons and attack patterns, such as quick, relentless hunters homing in on you, slow bombers and spinners with spread fire. Destroyed enemies release power-ups from time to time, such as shields, faster fire rates and multi-directional fire. At certain intervals are special stages with enemy bosses and fortresses.