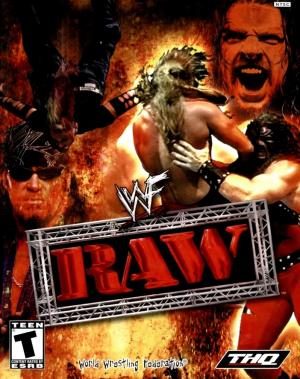 WWF Raw (also known as WWE Raw or WWF Raw is War, depending on version) is a video game released on the Microsoft Xbox and Microsoft Windows by THQ in 2002. It is based on the television series of the same name. It was the first WWE game released on the Xbox and also the last WWE game released on PC until the release of WWE 2K15 thirteen years later in 2015. A sequel was released in 2003. It is also the last game released under the WWF name, as the World Wrestling Federation changed its name to "World Wrestling Entertainment" in May of that year. The game offers the players a wrestling experience with various matches like singles match, tag team match, triple threat, fatal four-way, battle royal and handicap matches. The players can also play various tournaments such as King of the Ring and several title tournaments. They can create their own character as well as their attire, move set and entrance. The game has a weak/strong grapple system and there are two types of grapples: one which is done with normal opponents and other with groggy opponents. The normal grapples do little harm when compared to grapples done when the opponent is stunned. There is a voltage meter which shows the momentum of the wrestlers. Special move, high flying attacks and taunting boost the momentum while repeated attacks cost loss in momentum. Finishers can only be applied when the opponent is stunned and the voltage meter is flashing. Excessive use of finisher also cause loss in momentum.