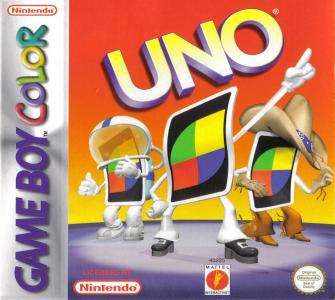 UNO, the classic card game of skips, draw-twos, and reverses, has come to the Game Boy Advance. There are two modes of play: Standard and Challenge. Standard has the players keep going until they reach a specified number of points, usually 1000. However, a player only scores points when he gets rid of all the cards in his hand. The points are the total value of the cards left in the opposition's hands. In Challenge, each player has a set number of points, and a player is eliminated when he reaches the point total. Play continues until one player is left standing. In both modes, you can play against up to three computer-controlled opponents. You can also play a single human opponent via a link cable. As an added bonus, there are three new cards that are not part of the real-world game. Now you can play UNO by yourself.