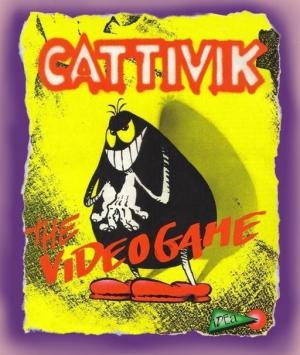 Cattivik is an Italian comic book series created by cartoonist Bonvi and later continued by Silver. It is a parody of Diabolik, another Italian comic, in that the protagonist is a stupid, selfish, ill-mannered and hapless thief, as opposed to Diabolik's "gentleman thief" reputation. In this video game adaptation the player controls Cattivik, who must burglar homes, art galleries, banks etc. in a series of puzzle-platforming levels. The goal of each level is to get rid of all the people inside the room, including hosts, dogs and security guards. Cattivik cannot directly attack the enemies, but must instead set traps for them and use the environment to his own advantage, as in the likes of Bonanza Bros. and Spy vs Spy. The player starts with a limited amount of traps including explosive mice, bombs, portable holes, jack-in-the-box toys and banana peels. Elements of the environment that Cattivik can use include lifts, poles, furniture (which can be used to block the enemies' path or dropped on their heads) and levers that activate fireplaces, trap doors and hydraulic presses. Scattered around each room are other useful items such as roller skates, pogo sticks and parachutes. Cattivik is vulnerable to his own traps, as well as to enemy contact and falls from high places, each costing one of his lives. Once a room is cleared of enemies, Cattivik has a limited time to ransack it for valuables, which are worth points that ultimately grant extra lives. More traps can be gained by playing bonus whack-a-mole games between stages.