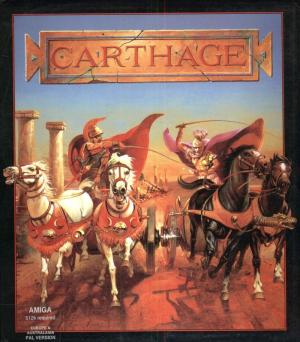 Defending the ancient Carthagean Empire from Roman invasion is your challenge in this arcade-strategy fusion. Your armies can be supported by catapult and elephant-mounted units, but only if these are already available and you find them first (building doesn't really come into play). Guarding the hills also gives you an advantage in combat. Each unit becomes more skilled and happy if they win battles, but fatigue comes into play if they fight too frequently. You need to pay for the soldiers, which is done by producing goods to trade. Actually distributing the cash appropriately involves transporting it via chariots, which improbably leads to an arcade racing-type sequence in which you must avoid not only rocks and trees, but also Roman chariots (why they are heading in the same direction as you every single time needs explanation) - contact loses you money.