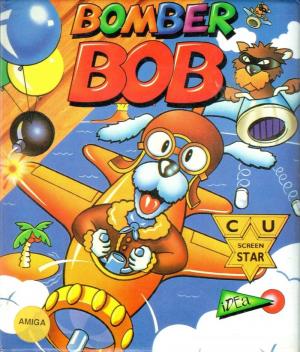 Bomber Bob is a vertically scrolling shooter by Italian studio Idea. The player controls a dog flying a World War 1 plane, able to shoot both other aircrafts in the air (controlled by humorous caricatures of dogs, pigs wearing WW1 helmets and other animals) and bomb targets on the ground for coins, via a fixed crosshairs like in Xevious or Twinbee. These coins can be spent in between levels to purchase weapon upgrade and extra lives from a vending machine. Also in between levels the game offers a few false-3D flying stages where we see the plane from behind and have to fly through a tunnel while trying to avoid the walls. There also are a few end level bosses, mostly farm animals. The game is imbued with humor: destroyed enemies plummet to the ground like Wile E. Coyote from the Road Runner cartoons, accompanied by funny voices and sound effects, matching the cartoony feel of the game.