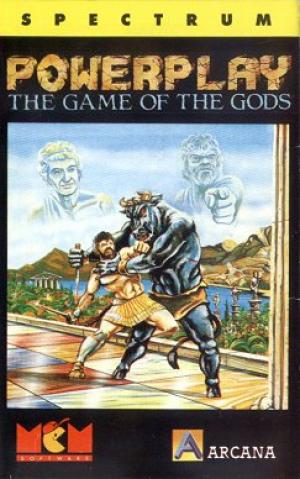 Also know as: The game of the gods

POWERPLAY: THE GAME OF THE GODS SPECTRUM LOADING INSTRUCTIONS Powerplay is recorded on the A side of the cassette. Owners of 48K machines type LOAD"" (ENTER). 128K owners select the LOADER option from the power-up menu. The question sets are recorded on the B side of the cassette so follow the on screen prompts when the main game has loaded. Recorded after the main game is Andy Severn's amazing 128K only CD Demo. Load by selecting the LOADER option. POWERPLAY, THE GAME Each player starts the game with 4 warriors, and is tested on their knowledge of the universe, the better a player responds the more powerful his warriors become. The four grades of warrior are HERCULES: the weakest, CYCLOPS: possesses the strength of many men, MINOTAUR: a very powerful warrior, SATYR: the most evil and powerful. These warriors will fight bravely for their masters until only one player remains. GETTING STARTED Firstly you must select the desired control methods for Players 1-4. The object of the game is to eliminate you opponents' pieces from the arena. The current player may cycle through his pieces by pressing up or down. Having chosen a piece the player must press fire. The player is then given a question. The squares in the arena are divided into four colours corresponding to the following subject areas: (empty square) general knowledge (lined square) sport and leisure (cross-lined square) science and technology (full square) history and geography The question will appear at the base of the screen along with four possible answers, the player may select an answer using the up, down, left and right controls. If the answer is correct, 'wisdom points' will be awarded to that piece. The slower you answer the less points will be gained. If the player answers incorrectly, or runs out of time, no points are awarded ans play passes to the next player. When a question has been correctly answered the player may move the selected piece onto any neighbouring square using the following key combinations: Left: rotate anticlockwise Right: rotate clockwise Fire: jump A piece may not be moved off the board or onto a square occupied by a piece belonging to the same player. Moving onto a square occupied by an opponent's piece will invoke a challenge. Falling into a hole will cause you to disappear and then reappear on any unoccupied hole. MUTATION If during the course of the game a piece accumulates a score of 25 wisdom points or more the option to mutate to a higher strength level will be given. If mutation is desired, press FIRE. CHALLENGES To invoke a challenge, a player must try to move his warrior onto a square already occupied by an opposing player. The challenge sequence consists of two players competing against each other to answer a question on a randomly selected subject. When the question is presented each player must answer as quickly as possible. The player answering first wins the challenge if the correct answer is given. If neither player answers within the time limit the challenger will lose the challenge. The warrior belonging to the losing player will be mutated down one level. If the losing player's piece is at the lowest strength level, it will be eliminated from the game. POWERPLAY CREDITS Original design, code and graphics: The Arcana Software Design Team. Spectrum Code & Loading Sequence: ANDY SEVERN Sprites and Backdrops: COLIN SWINBOURNE PLAYERS PRESENT THE 'CD' DEMO (128K ONLY) Andy Severn's CD demo bit in the middle. 1 BRAT ATTACK (TAMARA DUB MIX) 2 SHANGHAI KARATE (CHINA TOUR) 3 SHANGHAI KARATE (CELEBRATION OF A NATION) 4 SWORD SLAYER (SPARTACUS THEME) 5 JOE BLADE II (MUSCLE MIX) 6 JOE BLADE II (MAIN THEME) 7 DO OR DIE (JB2 SUB-GAME 1 MIX) 8 BRAIN ACHE (JB2 SUB-GAME 2 MIX) Music by HOUSE MASTER MIKE BROWN Performed by AY Engineered by ANDY SEVERN Art Direction & Graphic Design by JABBA Original Concept and Production SIMON 'FAX' DANIELS LICENSED FROM ARCANA SOFTWARE DESIGN PRODUCED FOR PLAYERS SOFTWARE BY RICHARD PAUL JONES (C) 1988 PLAYERS PLAYERS - Mercury House, Calleva Park, Aldermaston, Berks. RG7 4QW.