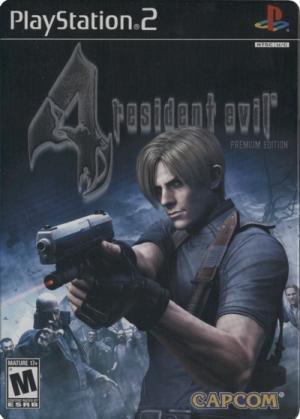 Resident Evil 4 is a survival horror third-person shooter video game developed by Capcom Production Studio 4[1] and published by Capcom. The sixth major installment in the Resident Evil series, it was originally released for the GameCube in 2005. Players control U.S. government special agent Leon S. Kennedy, who is sent on a mission to rescue the U.S. president's daughter Ashley Graham, who has been kidnapped by a cult. In a rural part of Europe, Leon fights hordes of villagers infected by a mind-controlling parasite, and reunites with the spy Ada Wong. Development began for PlayStation 2 in 1999. Four proposed versions were discarded; the first attempt was directed by Hideki Kamiya after producer Shinji Mikami. In a departure from the fixed camera angles and slower survival horror gameplay of previous instalments, the team focused on developing more dynamic shooting action. The Resident Evil 4: Premium Edition, was packaged in a SteelBook media case, along with the art book, a documentary DVD, and a cel art of Ada.