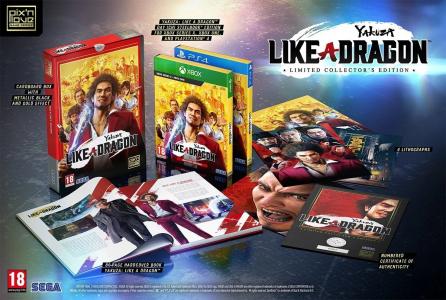 Yakuza: Like a Dragon is a role-playing video game developed and published by Sega. It is the eighth main release in the Yakuza series, and was released in Japan and Asia for PlayStation 4 on January 16, 2020. It had a worldwide release on November 10, 2020 for Microsoft Windows (Japan, East and Southeast Asia excluded, without an official reason given by Sega), PlayStation 4, Xbox One and Xbox Series X/S; the latter being released with the game as a launch title. A version with the subtitle International is set to release in Japan and Asia on February 25, 2021 for the Xbox One, Xbox Series X/S and Windows 10, and on March 2, 2021 for the PlayStation 5; the latter being set for release worldwide on the same date. In contrast to the previous Yakuza games that focused on the life of Kazuma Kiryu, a man trying to lead a normal life following his removal from the Tojo Clan, this game instead introduces a new protagonist named Ichiban Kasuga. After being imprisoned for 18 years only to then be betrayed by his former boss, Ichiban goes on a personal quest to become a hero and uncover the reason for his betrayal alongside other playable characters. The game offers both Japanese and English audio to the player.