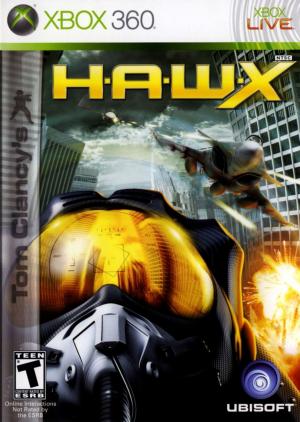 Tom Clancy's H.A.W.X is a 2009 arcade flight video game developed by Ubisoft Romania and published by Ubisoft for Microsoft Windows, Xbox 360 and PlayStation 3, and by Gameloft for BlackBerry PlayBook, iOS, Palm Pre, Android and Symbian^3. It was released for Xbox and PlayStation in North America on March 3, 2009,[1][2] for Windows on March 17,[3] for iOS on December 9,[4] for BlackBerry on January 8, 2010,[5] for Palm Pre on April 2,[6] for Android on September 13,[7] and for Symbian on January 16, 2011.[8] A Wii version was announced, but was ultimately canceled.[9] In September 2010, a sequel titled Tom Clancy's H.A.W.X 2 was released for Xbox 360 and PlayStation 3. The Microsoft Windows and Wii versions were released in November 2010. The story of the game takes place during the time of Tom Clancy's Ghost Recon Advanced Warfighter 2. H.A.W.X is set in the near future where private military companies have essentially replaced government-run military in many countries. The player is placed in the shoes of David Crenshaw; an elite ex-United States Air Force pilot who was recruited by one of these corporations, fighting whomever and whenever he is told to. Crenshaw later returns to the Air Force together with his team, trying to prevent the PMC from initiating a full-scale attack on the United States. H.A.W.X received mixed reviews from critics.